The first president was mr. WJG Anderson.  In the first season of rugby in South West Africa mr Anderson also were the referee in the matches played.  He was the only referee in the country at that time. In this same year UNITED was established.  In 1916 the search for a proper rugbyveld commenced and the search continued on to 1960.  The first piece of veld available was between the old station and Kaiserstrasse. The first two matches played on that veld was with a soccer ball.  The first rugby ball arrived from the Cape only here to be used in the 3rd match.

Wanderers Rugby Club was established.  According to a spoken agreement the people in service of the SWA Administration and the Education, will play for United and all the people working for the banks and postal offices will play for Wanderers.  The Windhoek High School also joined in 1920 the junior league.

A Comitee decided that each kind of sport in the country must have it's own sports veld.

The High School of Keetmanshoop at this stage also joined the junior league. Police is established which at this stage changed their name to Pirates which give the administators a lot of problems.

The Damaraland Rugby Union asked if they could use the veld of the Recreational Club of the Railway for rugby purposes.

The Damaraland Rugby Football Union moved to the Railway veld. The Railway Club was established and the first rugby touring group was taken to South Africa. 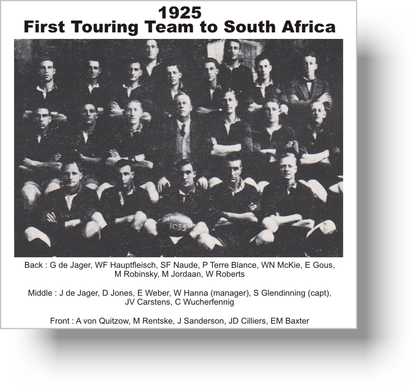 Pirates changed their name back to Police and USAKOS CLUB and KEETMANSHOOP CLUB was established. 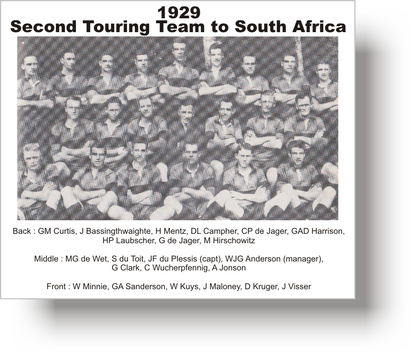 On tour the Maties scored 162 points and the teams of South West Africa could only scored 2 penalty goals.

The Ikeys arrived in South West Africa for a tour of also seven games.  The manager was Mr. JP du Toit and George Osler was the captain.

They won all seven their games against teams of South West Africa.

The two Clubs of Mariental and Gobabis was established. 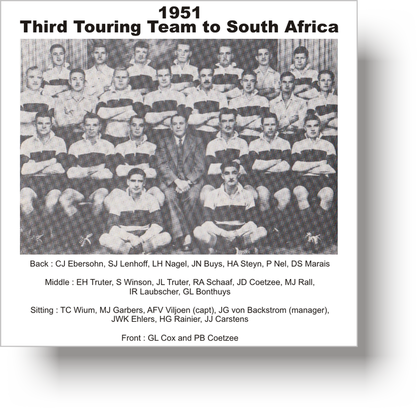 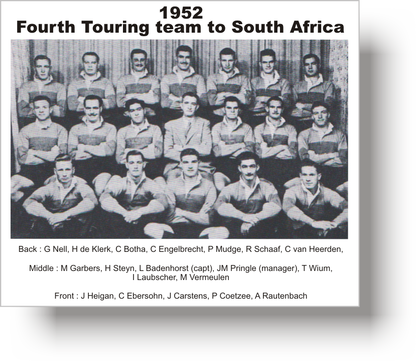 Tsumeb Club was established.  In 1953 another tour from South Africa arrived in South West Africa.  This time it was a team from the North Western Free State which the visitors lost 8-9 against South West Africa in Windhoek

In 1954 the Municipality of Windhoek provided a piece of veld for a rugby field.  They started to plant lawn and for the first time it seems as if South West Africa will have a rugby field with lawn on it to play decent rugby. The South West Africa Rugby decided to join the Currie Cup competition in South Africa. In the Rugby Chambers the men started to talk about a logo to identify them on the rugby veld.  The first idea was of a welwitschia plant (see original picture that was submitted as an idea for the logo) was set aside because everytime you would have to explain to logo to a person because nobody at that stage new the welwitschia plant.  They then decided on a jumping Zebra on a red background.
1954 saw the start of South West Africa's campaign in the Currie Cup Competition, the oldest rugby competition in the world.

In their first match against Western Province they lost 3-24 but then they shook the other competitors when they beat South Western Districts with 6 points to 4. 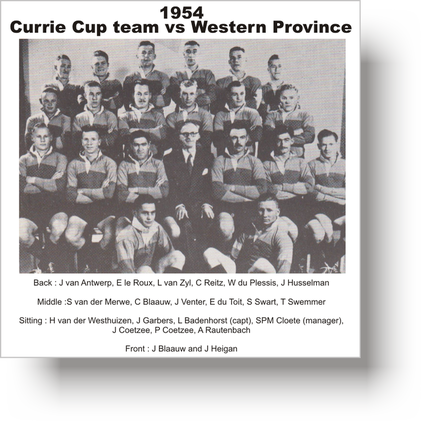 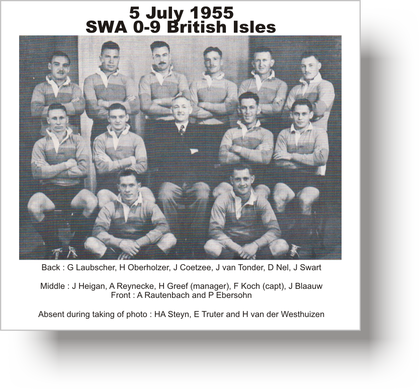 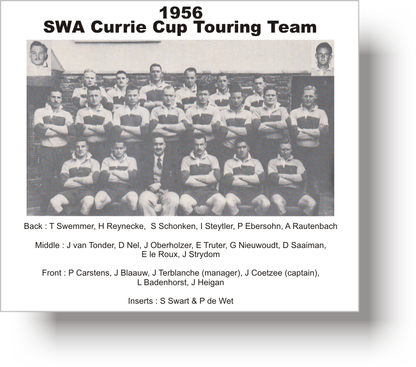 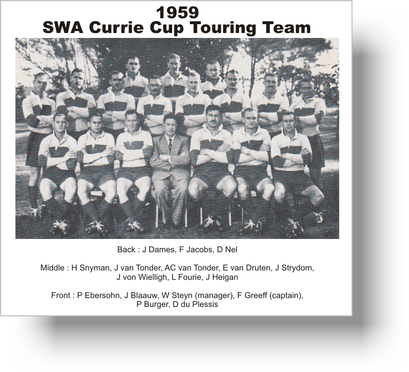 On 25 September 1976 South West Africa travelled to Ladysmith in South Africa to play Northern Natal in their second Sport Pienaar Final.  South West Africa came back home with the trophy after they won the game 21-9. Days later on 2 October they lost their Promotion/Relegation match against Boland 6-9.

On 10 September 1977 South West Africa played in their third Sport Pienaar Final. They lost 11-18 in Kimberley against Griqualand West.

South West Africa played in their fifth consecutive Sport Pienaar Final.  On 15 September in Pietersburg against Far North. They won the game 24-18 and returned home with the trophy for the second time in five years.

The sixth consecutive Sport Pienaar Final for South West Africa.  They lost 9-27 on 6 September in Springs against Eastern Transvaal. Two weeks later they lost their Promotion/Relegation match against Western Transvaal in Windhoek 7-25.

On 6 September 1986 South West Africa played in the Currie Cup B section final in Durban against Natal and lost the game 8-19.
1987